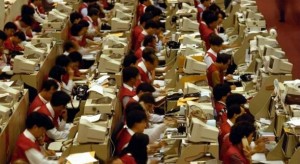 The word outsourcing has transformed from something that was never heard of to a common business practice that allows companies to save tons of money by shipping the jobs overseas. In a global economy if someone can do the same job for a smaller amount of money – why not let the free market decide who get the job? – that is the argument we hear from the business side. And disregarding if you agree with it or not, the reality is that outsourcing is here to stay and it may be your current or future job that is going to be outsourced.  Is your job at risk, should you fear or embrace outsourcing? Let’s look at the  jobs in the highest risk of being outsourced.

Below are the 10 jobs in highest risks of outsourcing

1. Computer Programming and IT Jobs

According to statistics released by Bureau of Labor, computer programming is the number one job that is most likely to be outsourced to countries like India where competitive software developers, computer programmers, and IT analysts are more than happy to charge as low as 1/10th of the salary of their American counterpart. For the past 10 years or so, several giant companies like Microsoft has opened big operations in India to take advantage of highly skilled and low-cost labor force. Other companies that follow suit include Dell, SAP, IBM, and even American Express. These companies have reported at least 40% reduction in cost and a relatively good quality output.

Newspapers in the United States, the United Kingdom, and other developed countries have been reporting steady decline of advertising revenue as more and more people resort to the Internet to get their daily dose of business, entertainment, and sports news. To cut cost, these newspapers and even news websites are now relying heavily on freelance writers from all over the globe to produce high quality content for fraction of the cost. Aside from newspapers, freelance writers are also hired these days to write company reports, movie scripts, and even electronic e-books.

Start-up companies that cannot afford to hire full-time personal assistant are now turning to virtual assistants that are offering their services online. These assistants are very useful in early days of launching a company where phone calls and emails from potential customers are expected. With their help, business owners can focus on the core of their business and do not have to worry about answering their emails, scheduling their flight, paying their bills, and even answering phone calls when they get home at the end of the day.

Any American who has called to ask about a bill on their credit card or why is some order hasn’t arrived yet and spoken to a customer service representative with different accent and choice of words would now automatically know that their calls are routed somewhere in Asia. Over the past 15 years, more and more companies have set up call centers in developing countries like Philippines and India and enjoyed tremendous savings. However, as more and more customers are getting frustrated because of communication and language barrier, some companies are now slowly bringing back the operations to the United States.

Although outsourcing doctors is a virtually impossible, other medical processes like medical transcription is being outsourced to medical professionals in countries where English is used as first or secondary language like in India and Philippines. When a doctor records something during routine check up or when a patient is on the operating table, it is meant to be included in the patient’s record. Instead of hiring somebody in the United States for about $15-$50 per hour, these can be done in emerging countries for as low as $3 per hour. Although concerns were raised in regards to the confidentiality of patient’s health records, more and more medical transcription jobs are being outsourced across the globe to reduce cost, which is critical particularly this time when most developed countries are hounded by financial crisis.

Hiring drafters, which are tasked to draw up detailed plans for projects that will be handled by engineers, scientists, and architects, can be extremely expensive when done in developed countries. This is the reason why it is outsourced to highly-educated and highly-skilled professionals across the globe. These drafters typically have impressive educational attainment, relevant experience, and expertise on the subject matter yet, they charge a fraction of the cost compared to their American counterpart. Aside from drafting the plans using provided specifications, they also apply their knowledge in engineering and manufacturing to add details that are critical in transforming a concept to reality.

Any job that doesn’t require face-to-face interaction can be outsourced and this makes non-manufacturing job even more susceptible to being sent offshore. All it takes to get this job done is comprehensive information on the client’s financial information (which can be easily sent online) and in-depth knowledge on applicable tax laws in a specific country. In an effort to keep the job in the country, the US government required companies to let their customers know if their tax is being completed overseas. However, it seems that it did not make any difference as more and more companies are still hiring tax preparers overseas.

Giant companies like Microsoft are making sure that they can tap highly-educated workforce without burning a hole in their pockets.  Last year, Microsoft spent $100 million and built a research center in China, which employed 1,500 employees. Experts agree that it wouldn’t be last to do so. Other giant companies are taking advantage of highly skilled professionals to do their research in other emerging countries. As they seem to get exactly what they’re looking for little or no problem at all, it is expected that this trend will continue for many years.

China’s robust economic growth can be attributed to the fact that more and more manufacturing firms, which include Boeing and General Electric, are taking their manufacturing activities in the country. This is because China along with other countries such as Vietnam, has offered huge differences in hourly wage that giant companies find too difficult to resist. Although the recent wage inflation has discouraged some companies to outsource this job, experts believe that there is still a good chance that the jobs won’t return to developed countries as building manufacturing facilities will require huge upfront costs.

Aside from the Call Centers, Business Process Outsourcing (BPO) is one of the most common job functions for outsourcing. BPOs are used for mundane business functions such as filling up health care paper work, accounting transaction, and others. Although India used to be the most popular destination for these specific functions, Philippines and China are catching up faster than expected.

5 thoughts on “10 jobs in highest risk of outsourcing”